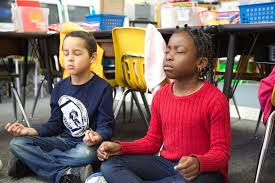 An increasing number of children have been showing elevated signs of stress, restlessness, and anxiety starting at a very early age. I know meditation is a great tool to find peace and balance amid our hectic lives—that’s why I enjoy my practice. How do we get our kids to love meditation, too? We show them.

As a former teacher who now practices meditation myself, I’ve often wondered how I could have used this practice in my own classroom. The stress level of teaching seemed to bring out my already-existing anxiety in the worst kind of ways. I slept poorly, unable to stop rehearsing my
lessons in my head. I got irritable with loved ones. I felt obsessed with saving time when there was so much to do and so much to teach to students who I feared we were behind. My students noticed, too. However, once I had my own children, and began my research, I noticed that children were prone to copying the behavior of their parents and/or teachers. So starting them on a meditation journey is not that difficult, but can only happen when we (parents and teachers) lead by example.

When your kids observe you in meditation, it sets a tone that children can learn from. When I’m sitting in meditation in the morning, my son wakes up and come sits quietly with me (either on my lap or nearby) and enjoy starting their day in silence. I’ve now started this practice in every school districts that invites me to speak.

Many experts recommend one minute of meditation per year of age, starting at around age eight. If our kids are being diagnosed with ADHD before the age of six, we may need to start earlier. The structure will depend on your child’s age and nature, which you’ll have to learn with trial and error. My son, who is eight, typically stays comfortably in mediation longer than his older siblings.

Since kids love to sing. Chanting improves focus and concentration and has powerful effects on brain development. Here are a few of my go-to mantras and tips to make the most of the experience:

OM is the sound of the universe and divine intelligence: kids can connect with that! Allow your little ones to play with the tone and volume of their OM’s and
go at their own pace. The sound can range from a strange and harmonious choir to the sound of different animals howling the jungle. Chakra toning: Hang up a chart or painting of the chakras (the body’s seven major energy centers). Point to the chakra and have them imagine the color in that area of their body. Have them chant the mantra associated with that chakra. You can also just make similar sounds that the vowels make, as in- uh, ooo, oh, ah, eye, aye, and, eee.

After toning or using mantras, ask them to keep their eyes closed for a while and notice how they feel. This is a powerful meditation tool that can help kids gain awareness of the effects of using mantras.

What are the benefits?

The Journal of the American Academy of Child and Adolescent Psychiatry (JAACAP) and CDC (Centers for Disease Control) published research that showed an estimated two million more children in the U.S. were diagnosed with attention-deficit/hyperactivity disorder (ADHD) between 2003 and 2012 and one million more children were taking medication for it. What’s more concerning is—most of the diagnoses started before the age of six.

A study done at the National Therapies Research Unit at the Royal Hospital for Women in Sydney Australia, showed significant improvements in ADHD symptoms with children who were taught to meditate. The children reported improved attention spans and less hyperactivity.

Other encouraging side effects listed were:

Exposing our children to these ancient, yet practical, techniques could help them to cope better with stress and grow into living healthier lives. So how do we get our kids excited about meditating?

We just do it.